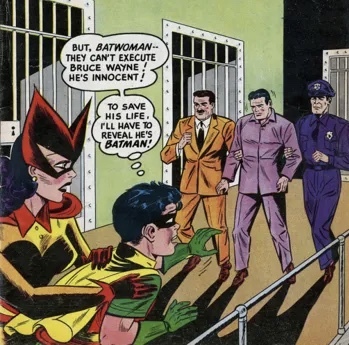 "It's clear to me that this trial was constructed with lies. And based off everything that I've seen, I think we can build a case strong enough to bring Johnny D home. And I'm not gonna stop til I've done that."
— Bryan Stevenson, Just Mercy
Advertisement:

Someone is accused of a crime they did not commit, and must haul ass to prove their innocence.

Sometimes, the person accused of the crime is incapable of proving their own innocence for themselves. Maybe they've already been arrested or convicted, and had the key thrown away long ago. Maybe the evidence is stacked up against them and almost nobody believes them. Maybe they're just not badass enough to do it themselves. Either way, it's up to the hero to buck the odds and naysayers, find the evidence and Clear Their Name.

The poor sap locked up will usually have one person—often a beloved relative or a best friend (who's actually in love with them, hence their fixated devotion)—who remains committed to their cause, and who brings in the often-initially skeptical heroes to investigate the case. In some cases, the loved one's devotion to the wrongfully accused will persist even if the wrongfully accused has given up hope of being exonerated. If the hero's good enough, they may learn of the case independently and offer their services to the skeptical police, who are convinced they've got the right person locked up. In some cases, the police might be corrupt and actively perpetuating a Miscarriage of Justice in order to obscure the true culprit or another crime.

Given the nature of the trope, it usually occurs in media which involves defense attorneys or Private Detectives unaffiliated by the police, although particularly conscientious police officers may find themselves also working to clear some innocent's name.

Occasionally the person who's locked will up be guilty after all. Another popular twist is to have the guilty party be the one who wants the accused cleared (often because of feelings of guilt) but doesn't have the guts (or in some odd cases can't prove it as it looks like they're just taking the fall for them) to confess.

If it's the protagonist who has to prove himself/herself innocent in the face of a false accusation, it's Clear My Name. May overlap with Guilty Until Someone Else Is Guilty.