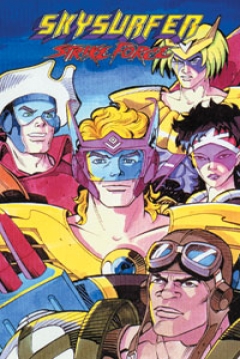 (From top to bottom) Soar Loser, Crazy Stunts, Sliced Ice, Skysurfer One, and Air Enforcer
"When a mysterious explosion destroys an artificial intelligence lab, Adam Hollister is framed - his son, Jack Hollister, sets out to prove his father's innocence, that someone else had caused the explosion and had stolen an experimental computer brain; merging it with his own brain, he transforms into the master criminal known as Cybron. To fight Cybron and his evil Bioborgs, Jack Hollister becomes Skysurfer One, leader of the Skysurfer Strike Force."
Advertisement:
—The Opening Narration from the first season.

Skysurfer Strike Force is a syndicated cartoon show that aired on the Amazin' Adventures cartoon block (later renamed BKN)note Which distribution company Bohbot Entertainment would later adopt as the company's name.. Created by Ruby-Spears Productions, this series ran for two seasons from 1995 to 1997. It was Ruby-Spears' final production before closing down.

As the Opening Narration above explains, the series featured a titular team of five heroes, led by Jack Hollister aka Skysurfer One, who fight show Big Bad Cybron and his Bioborgs to stop his attempts at world domination and clear Jack's late father Adam's name. The Skysurfers used technologically advanced wrist-worn Digitrans that transformed them from their casual clothing to battle gear and weapons. During the transformations, their cars transform into rocket-powered aerial surfboards that they ride.