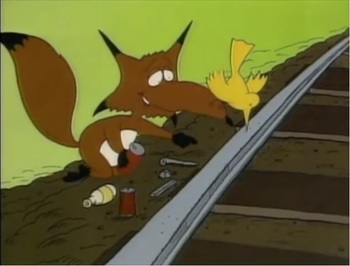 The animal stereotype tables have turned in order to teach kids railroad safety...
Sly Fox and Birdie is an animated railway safety video aimed at kids, produced in 1992 by the Union Pacific Railroad and Operation Lifesaver. It stars a Cloud Cuckoolander fox that often finds himself in danger involving trains, and his avian friend Birdie that often has to tell him how dangerous what Sly's doing is. A new version was produced in 2006 using Adobe Flash animation.

The 1992 original provides examples of:

The 2006 version provides examples of:

"If I weren't a cartoon character, I'd be dead as a doornail!"

"If I weren't a cartoon character, I'd be dead as a doornail!"