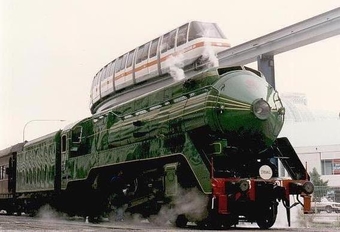 built in 1943 and still steaming in Australia today.note It even outlasted the monorail in the image!

"Diesel is for unbelievers
Electricity is wrong
Steam has got the power that will pull us along."
— Starlight Express, "Light at the End of the Tunnel"
Advertisement:

A sub-trope of Anachronism Stew. The cultural snapshot we have of locomotives, especially as portrayed in children's media, seems frozen in time. The protagonists may eat modern junk food, watch Netflix, and email their homework, but when the time comes to take the train to visit a relative, suddenly it's 1900 all over again, complete with steam engine, caboose, coal tender, old-timey passenger cars, and engineers wearing blue coveralls and tall hats.

This trope was more general until about the early 1980s. Movies and TV shows might still portray steam trains in exotic foreign locales or on preserved heritage lines, but as the 20th century wound down, Steam Never Dies retreated to children's literature and cartoons, where it seems permanently entrenched.

Within the examples, expect plenty of Just Train Wrong and a general ignorance of how steam actually works in the first place; many works of fiction will treat steam engines like an internal combustion engine by a different name and ignore the finer points of their operation and the infrastructure that they require.

Not to be confused with Steampunk, though some of the artistic sentiment may overlap. Compare Excessive Steam Syndrome. Also has nothing to do with the Digital Distribution service.