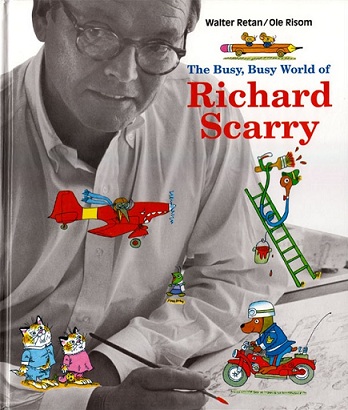 Scarry and his best Busytown characters ever.
"I'm not interested in creating a book that is read once and then placed on the shelf and forgotten. I am very happy when people have worn out my books, or that they're held together by Scotch tape."
— Richard Scarry on his books
Advertisement:

Richard McClure Scarry (June 5, 1919 – April 30, 1994) was an American children's author and illustrator known for his anthropomorphic animals, particularly those of the "Busytown" books, which were later adapted by Cinar (now Cookie Jar) into an animated series, The Busy World of Richard Scarry (1994–1997). It was aired on Nick Jr. on Nickelodeon. Additionally there was a series of educational Direct to Video releases made by Jumbo Pictures. The direct-to-videos are:

The most recent adaptation of the characters is Busytown Mysteries (also known as Hurray For Huckle in some regions), also by Cookie Jar; it aired on Cookie Jar TV and PBS Kids Sprout.

The Busytown characters were also adapted into educational video games, most notably Richard Scarry's Busytown in 1993 for DOS and Apple Macintosh, which was ported to the Sega Genesis in 1994 and given an enhanced remake for Microsoft Windowsnote Windows 95, 98, and later and "Classic" Mac OSnote System 7.5.1 and later that update the graphics, animation, and voice acting to resemble The Busy World of Richard Scarry series.

Scarry's adaptation is based on the song but uses elements from the original 1939 story and the 1948 cartoon by Max Fleischer.

Wow, what a show!