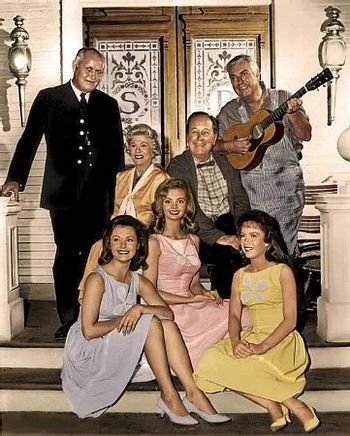 Petticoat Junction is the intermediate entry in Paul Henning's trio of rural-themed '60s sitcoms, which also included The Beverly Hillbillies and Green Acres. The show was produced by Filmways and originally aired on CBS from 1963 to 1970.

The series centered around Kate Bradley (Bea Benaderet), a widowed mother of three teenaged daughters and the owner of a quaint hotel called the Shady Rest near the small whistle-stop town of Hooterville. In this she was allegedly assisted by her bachelor uncle Joe P. Carson (Edgar Buchanan), who tried to avoid getting involved in anything resembling work. Most episodes revolved around Kate trying to micro-manage her girls' love lives or deter Joe's various money-making schemes. From time to time the railroad company, represented by the mean-spirited Homer Bedloe (Charles Lane), would threaten to shut down the isolated spur line serving Hooterville and its antiquated "Cannonball" train, but Kate would always straighten them out, because she needed the train — operated by engineer Charley Pratt (Smiley Burnette) and fireman/conductor Floyd Smoot (Rufe Davis) — to bring the Shady Rest its guests.

Petticoat is known for its numerous cast changes; to start, there were the three daughters, Billie Jo, Betty Jo and Bobbie Jo (just don't ask which one's which). Only one of them was played by the same actress through the entire series, and another daughter was recast twice. Then, Bea Benaderet fell ill and died early in the sixth season, so June Lockhart was cast to replace Kate as a new maternal figure, town doctor Janet Craig. Lockhart played her character straighter than comical Benederet, and the remaining episodes shifted more to Betty Jo's married life. There was also some turnover in the supporting cast along the way.

Kate was related to The Beverly Hillbillies via Cousin Pearl (also played by Bea Benaderet), who in turn was the cousin of a man named Jed. Eventually, Oliver and Lisa Douglas settled in Hooterville, resulting in the birth of Green Acres. Characters from each of these shows appeared on the others at one point or another, with Hooterville storekeeper Sam Drucker (Frank Cady) the most frequent link.