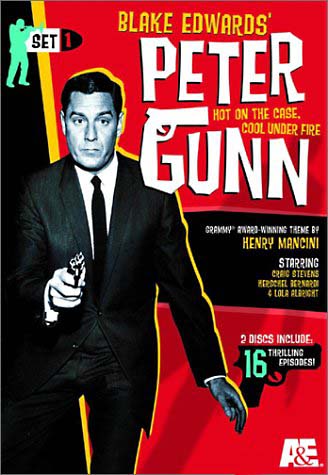 A Private Eye TV show created by Blake Edwards that ran from 1958–61, updating the Hardboiled Detective ideals of the 1930s with 1950s notions of jazz cool. It featured the crime-solving skills of the title character (Craig Stevens), who got equal portions of help and hindrance from Lieutenant Jacoby. He hung out in a nightclub where his girlfriend was the singer; the owner often provided tips and clues to the crime.

Well executed, but mostly forgotten... except for the fact that Henry Mancini's theme music is legendary, and still popular today. Edwards went on to direct the 1967 feature film Gunn, with Stevens returning to the role and Mancini back to do the music. Intended as the first film of a Peter Gunn film franchise, it did hardly any business at the box office and the character was retired.