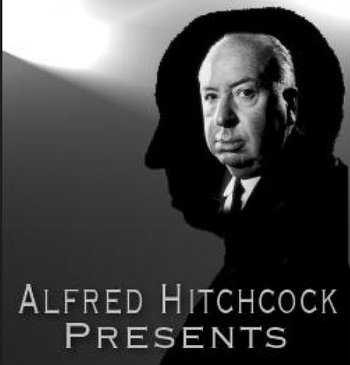 A Genre Anthology television series produced and hosted by the famed English thriller director Alfred Hitchcock. It originally aired from 1955 to 1962 (half-hour episodes) and 1962 to 1965 (hour-long episodes, as The Alfred Hitchcock Hour), bouncing between CBS and NBC for a total of ten seasons comprising 268 half-hour episodes and 93 hour-long episodes (of which 17 were directed by Hitchcock himself).

Each episode was a self-contained mystery or thriller story, with Hitchcock appearing before and after to make opening and closing remarks. Writers who scripted episodes of (or had stories adapted for) the series include Ambrose Bierce, Robert Bloch, Ray Bradbury, Fredric Brown, Roald Dahl, Avram Davidson, Harlan Ellison, Evan Hunter, Don Marquis, Richard Matheson, A. A. Milne, Ellis Peters, Dorothy L. Sayers, and Cornell Woolrich.

Notably for the time, Hitchcock would openly mock the concept of commercials (as opposed to the actual products themselves) in his remarks with statements such as "Join us next week as we present another fine selection of exciting and informative commercials. Oh, and if there's time, we'll also try to squeeze in a story between them."

A Revival, The New Alfred Hitchcock Presents, ran from 1985 to 1989; it featured new stories (and some newly-filmed remakes of old episodes) introduced by recycled (and colorized) footage of Hitchcock.