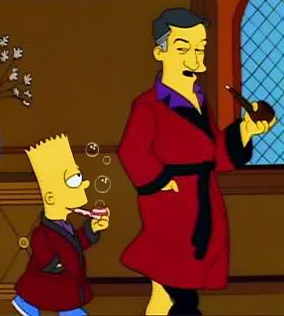 A Prop that's shaped like a tobacco pipe, but is clearly not on account of the fact that it blows soap bubbles. Related to No Smoking, as it is used instead of a real pipe as it gives the same impression without the implications of tobacco use. It's seen often when children dress up as Sherlock Holmes, or in attempt to look fancy or sophisticated.

Compare Distinguished Gentleman's Pipe, of which this trope is an affectionate diminutive.