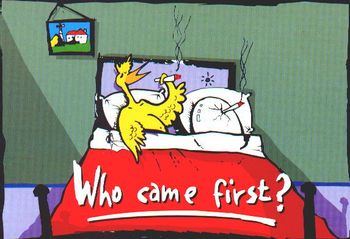 Well, guess that answers that question.
There are times that you need a cigarette! ...You don't wanna roll off somebody and go "Whoo, that was amazing! Skittles? Would you like some Skittles? How 'bout a Jolly Rancher, baby?"
— Dave Attell
Advertisement:

After sex, two lovers share a post-coital cigarette. Frequently, as in the picture, they'll do so sitting up in bed wearing a Modesty Bedsheet.

This trope hit an early peak during The '60s and The '70s, when anti-tobacco campaigns were in their most embryonic form and media as a whole was undergoing a transition to a new sexual frankness. Given changes that have occurred in society since then, it is mostly a Dead Horse Trope at this point, though it often pops up in parody and often happens in real life (the logic being that one satisfying sensation plus another satisfying sensation equals good.) Often used as a metaphor to say sex has taken place without showing it.

One occasionally seen variation is the post-sex pizza (maybe it's easier to get past the Moral Guardians?) Likely to happen right after a Post Coital Collapse.

Lynda and Bob go into Lindsey's house to meet up with Annie, unaware that Annie was killed by Michael Myers and have sex and smoke afterwards.

Lynda and Bob go into Lindsey's house to meet up with Annie, unaware that Annie was killed by Michael Myers and have sex and smoke afterwards.