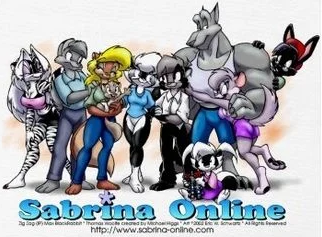 "The World Wide Web is like a spider's web — full of dirt and bugs."
Advertisement:

was a Furry Webcomic created by Eric W. Schwartz, who consistently managed to release the comic's monthly batches of strips on time for twenty years (1996 to 2016).

Schwartz brought the series proper to an end on the 15th of September 2016, twenty years to the day of the first strip's publication. His announcement said the final strip won't be the last, but subsequent stories will be on a "when the mood strikes" basis, rather than monthly updates to the comic. Of course, contributing to the strip's Patreon

account can encourage the mood to strike him more often.

The first after-series comics deal with Sabrina's pregnancy and birth of her daughter Danielle.

Not to be confused with Sabrina the Teenage Witch, or the 1954 film Sabrina.