I Banged Your Mom 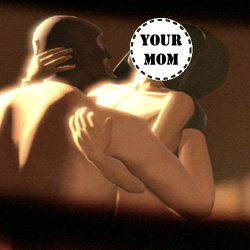 Pics, or it didn't happen.
Demetrius: Villain, what hast thou done?
Aaron: That which thou canst not undo.
Chiron: Thou hast undone our mother.
Aaron: Villain, I have done thy mother.
— Titus Andronicus IV.ii note "You fucked with our mom." "I fucked your mom."
Advertisement:

Basically this is when one character is sleeping with another's mom, usually for comedic effect. More frequently appears as "I Kissed Your Mom" in network television / basic cable.

Often carries the implication (if it's not stated outright) that the speaker was able to sleep with the mom because she Really Gets Around, usually prompting an angry My Girl Is Not a Slut reaction. Or else, the person is very uncomfortable with the idea of their mom having sex. Alternatively, the implication might be that the speaker is The Casanova, of a sort of "I can get with anyone, and to prove it, I've been with that one" boast. An even darker implication is that the speaker may have slept with the mom without their consent and is revealing this for kicks. Reactions are especially volatile if the mom has only recently become divorced/widowed from the dad, and even more so if she's still married to him. The characters this is said to are usually male, and they almost never get similar remarks about their dads; possibly a result of Most Writers Are Male.

People seldom say "Thank you, man, she was so lonely after the divorce," or "I hope you had fun, and I'll kick your ass if she didn't," or "Well, I hope you enjoy genital warts." Any of these would destroy the insulting intention with a good shrug-off. Strangely, often the only proof is the word of the person who says the line, and few of the attacked ever seem to seriously doubt the sentence. This trope is common mainly in American media, rarely seen (if at all) in continental European or Asian media.

If it's just an insult—they never actually did it—then check out Your Mom note Everyone else has! and That's What She Said. "I banged your wife/girlfriend" is a variant, and much more insulting. If it happened a long time ago, you may be looking for Luke, I Am Your Father.

See also Parental Sexuality Squick for the general awkwardness of Too Much Information about a parent's sex life, My Sister Is Off-Limits! when a man gets worked up over his friends getting involved with his sister, and Overprotective Dad when a man gets worked up over men and boys getting involved with his daughter. There's possibility for overlap with A Family Affair if the person doing the banging was already involved with one of their relatives (usually their daughter).

Alternative Title(s): I Banged Your Mum