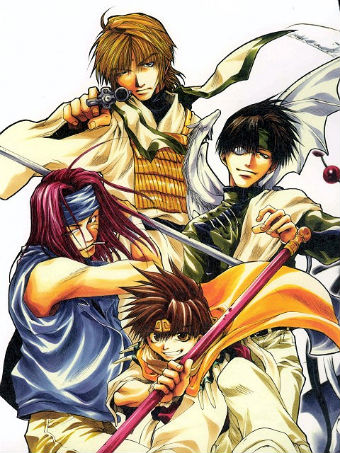 Clockwise from right : the husband, the child, the seducer, a snarky priest with a gun, and their means of transportation.
Advertisement:

Gensomaden Saiyuki (Saiyuki RELOAD, Saiyuki RELOAD Gunlock, etc.) is a manga and anime series inspired by the Chinese classic Journey to the West (which is pronounced Saiyuki in Japan, hence the title) by manga author Kazuya Minekura.

Set in a Schizo Tech universe where demons, mystical powers and nominally Buddhist Powers That Be (see the trope entry below for a better explanation) coexist with guns, credit cards, and a Jeep (which, coincidentally, transforms into a small dragon). In the past, demons and humans coexisted in peace. But recently, the demons have been driven to madness and violence. This was found out to be linked to the resurrection of the demon Gyumao, by forces unknown. In response, the trash-talking monk Genjyo Sanzo is commanded to journey West with his three companions Son Goku, Sha Gojyo, and Cho Hakkai. Sanzo's three companions aren't exactly what they seem, as they are demons who are only kept in check by accessories that also serve to limit their power. However, their history stretches back not only to the recent past, but to hundreds of years before.

Not to be confused with Sayuki

(nee Fiona Graham), the first and only white woman to become a geisha, or the much earlier 1960 Toei Animation film Saiyu-ki (released in the US as Alakazam the Great).