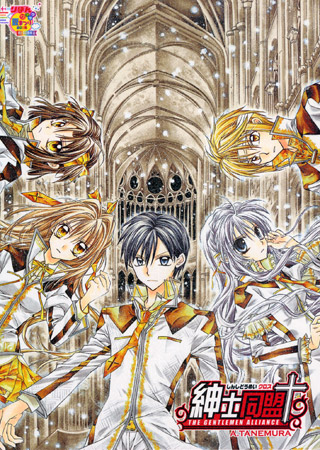 Ex-Yanki Genki Girl Haine Otomiya's tale is typical of a shōjo series. She fell in love with a young man, Shizumasa Togu, as a child, and after a certain point she decided to transfer to the prestigious school he attends and try to win his love. Much to her despair, however, he is unexpectedly cold to her and claims to not remember her.

She ends up joining the student council he heads, and becomes his bodyguard and fake lover. Over time, he appears to warm up to her, and she befriends the other members of the student council as well. There are still many obstacles to be had to her and Shizumasa's romance, however - including the obligatory shōjo Love Dodecahedron, Shizumasa's strange, seemingly completely random changes of heart, and Haine's own family issues.

Shinshi Doumei Cross (or The Gentlemen's Alliance Cross, as it's known in English) is a shoujo manga by Arina Tanemura (of Full Moon fame), which ran in Ribon from 2004 to 2008. The manga was compiled into 11 volumes, and is licensed by Viz Media and fully available in English. It's notable for being the first of Tanemura's series to not include any Magical Girl elements at all.