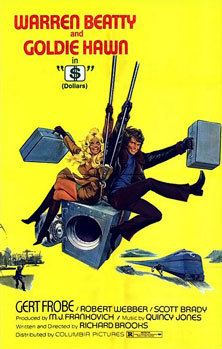 Yes, it really is called "$".
Advertisement:

$ is a 1971 film directed by Richard Brooks, starring Warren Beatty and Goldie Hawn.

Joe Collins (Beatty) is the security manager at a bank in Hamburg, Germany. Because this is a heist movie, Joe has a plan to rob his own bank. Or rather, he and his girlfriend, bubbly hooker Dawn Divine (Hawn) have a plan to rob three of Dawn's clients who are customers at the bank. A mob lawyer that Dawn calls "Mr. Las Vegas" keeps hundreds of thousands of dollars in his box. So do Sarge and Major, two U.S. Army soldiers who have been making a lot of money on graft and smuggling and now are graduating to drug-running. They are partnering with "Candy Man", still a third client of Dawn's who also has a box at the bank. Candy Man, a murderous sociopath, is also smuggling concentrated LSD for his drug lord bosses, hidden in two champagne bottles.

As Joe explains to Dawn, he isn't robbing the bank, he's robbing three sets of criminals who keep their loot at the bank, criminals who can't go to the cops. Joe stages a fake robbery and in the process robs the crooks for real, transferring some $1.5 million from their boxes to Dawn's. But just because they can't go to the cops doesn't mean that Sarge and the Candy Man can't come after Joe.

Gert Fröbe of Goldfinger fame plays Mr. Kessel the bank president, who is good friends with Joe and lusts after Dawn.