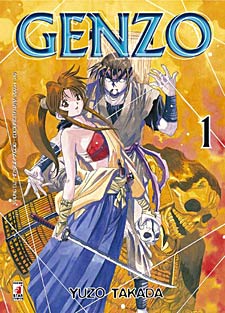 Genzo, a.k.a. Genzou Hitogata Kiwa (Genzo: Tale of the Human-shaped Fiend), is a short manga consisting of five volumes and written by Yuzo Takada, author of 3×3 Eyes and Blue Seed.

The story begins in the Sengoku Jidai, when Toyotomi Hideyoshi is the ruler of the land. The beautiful but tomboyish princess Kiku of Kamigawa ask the help of the legendary "Puppet Master" Seibei Tsuchimura, in order stop the plans of her Evil Uncle who has poisoned her Cousin/future husband Tatsumaru. The old Seibei has left the Puppetmastery art long ago, but he offer her the help of his apprentice and son-in-law Genzo Tsuchimura, who is trying to make a perfect puppet of her deceased and beloved wife Saki. Soon the Odd Couple get involved in a series of weird events and secrets plots.

The series doesn't really follow a specific arc, but it's more like a series of short stories, usually in a Horror fashion with some dark humor, drama and mistery inside. One of the volumes contains a short story titled "Gotsuden" (Tale of the Gotsu Sword) which take place two hundred years later and its about O-shizu, a young girl working for a Kawaraban (sort of newspaper), a wandering swordmaster looking for a cursed blade and some mysterious gruesome murders.