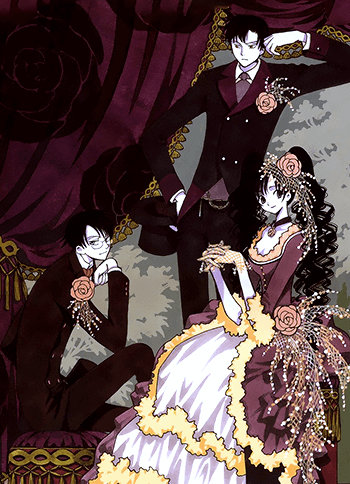 "How does it feel to be one of the beautiful people?
Now that you know who you are, what do you want to be?"
— The Beatles, "Baby, You're a Rich Man"
Advertisement:

The Beautiful Elite aren't just beautiful looking. Their whole life is beautiful. They are more fashionable than anyone else, more sophisticated and charming than anyone else, and are usually both fabulously rich and socially powerful. Their clothes are all way too expensive for you to ever own. They almost always live in a Big Fancy House that is so clean and well organized they look like they are Living in a Furniture Store.

Most of the time they simply fell into this status. In many cases, they are of royal descent, of divine descent, or at least belonging to some sort of lesser nobility. If they weren't born to the upper crust, they have managed to become a part of it. More likely than not, they have been educated in elite private schools. The Beautiful Elite rarely have to work hard at anything. In many cases, they don't have to work at all, but if they do have a job, it will be just as glamorous as the rest of their lives.

And to make all of this worse, those who don't rub it in are so gracious about it that one has to wonder whether their unparalleled humility isn't just one more way they're better than you.

Don't always count on Beauty Equals Goodness. Sometimes Beauty Is Bad, and they spend their time plotting to torment the poor, decent normal folk like (maybe) you and me. This type of character is the Trope Maker for Screw the Rules, I'm Beautiful!, and often benefits from Screw the Rules, I Have Money! as well.

Truth in Television, to some degree. In most societies, wealth and attractiveness are highly correlated; the wealthy have much greater access to resources for improving their own appearance, while the attractive often have much greater access to social, financial, and material success, whether through marriage or career opportunities. Beyond that, the very standards of beauty, especially feminine beauty, are usually primarily a demonstration of wealth! Hey, Life Isn't Fair.

Expected in Bishoujo Series, as well as Bishōnen. The Fair Folk are this when they are an Inhumanly Beautiful Race.

Compare Beauty Is Never Tarnished, Model Couple, Fashion Model. Often overlaps with The Proud Elite. When everyone in the show is like this, it is probably a Cast Full of Rich People.

Not to be confused with Elites Are More Glamorous, which is for a different sort of elite.

Too Good to Be True