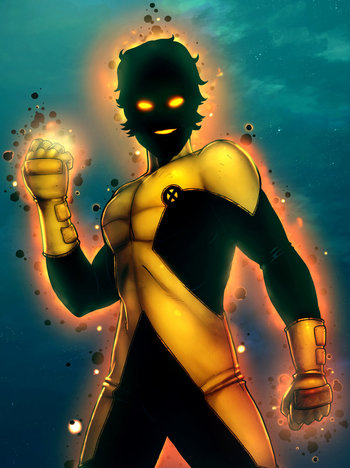 "I'm gonna do what I do best — spend money and save the universe."
Click here 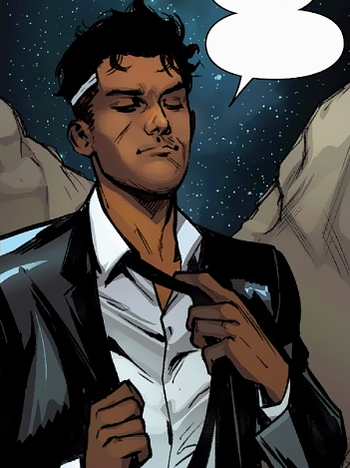 to see his non-powered form

"This world... I wish it wasn't so, but it can be dangerous place. Even with a heart as big as yours, you will have enemies. A true leader must be prepared to protect those he cares for, as well as himself. Your greatest weapon will always be your mind and your compassion, my son. But there will come a day when you're forced to fight for what you believe in.
You are a natural born leader, my son. One day you will show the world you have the fire inside you. I know you will do great things."
— Emmanuel da Costa, Avengers World #19
Advertisement:

A wealthy Brazilian mutant with the power of absorbing and channeling solar energy, Bobby is notable for being a founding member of the so-called "new mutants" from Xavier's School for Gifted Youngsters, primed to become the next generation of X-Men for their amazing abilities.

Bobby in particular became known for his impulsive personality, often acting first and thinking later, as well as his friendly demeanor. He grew especially close with fellow teammate Cannonball during their formative years, and they've since become one of the most popular pairs in all of superhero comics, rarely seen without the other. They even joined The Avengers together!

Though most commonly associated with the X-Men, he spent much of The New '10s as an Avenger, having joined the team (with Cannonball, as mentioned above) during Jonathan Hickman's time with the franchise.

During this time, he even bought out the villainous organization A.I.M., transforming them from Advanced Idea Mechanics to the international rescue squad Avengers Idea Mechanics; later, he again rebranded them as the US government-contracted American Intelligence Mechanics. As their leader, he also dropped his original codename and adopted the moniker of Citizen V, formerly held by super-villain Baron Zemo while masquerading as a heroic figure with the Thunderbolts. After the events of Avengers: No Surrender he resigns as leader of A.I.M. and changes his moniker to Citizen X, a reflection of his return to his mutant roots.

Outside of comics, Sunspot has appeared in live-action and animation. He's most notably appeared in the X-Men Film Series twice: as a minor character in 2014's X-Men: Days of Future Past, portrayed there by Adan Canto, and a co-leading role in 2020's The New Mutants, as played by Henry Zaga. He also showed up as a recurring figure in the animated X-Men: Evolution, voiced by Mike Coleman. As well, the character Marcos Diaz ("Eclipse") on FOX's The Gifted is essentially an expy of Sunspot, specifically based on a version of him from an alternate universe.

Sunspot has appeared in: