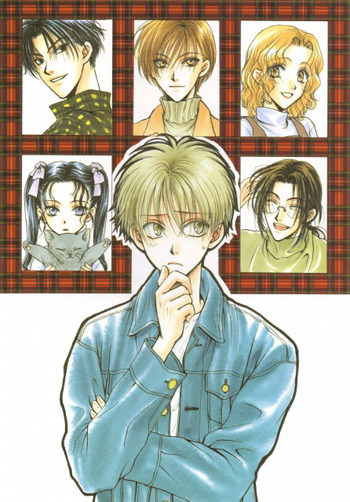 "I'm sure no one else has problems like this at their own house. They don't wonder, 'Why am I here?' or 'Maybe there's somewhere else I should belong',"
— Akira Sakamoto
Advertisement:

The Sakamoto family is widely known among their neighbours as the "perfect family", because every member of the household is blessed with stunning beauty... except for the second son, Akira, that is. Insecure about his lack of good looks, poor Akira feels very out of place among his family, and is very embarrassed to be seen in public with them. Despite his discomfort, Akira keeps his feelings to himself because he's afraid to hurt his family; but when they finally found out the truth, how can they settle their differences?

Family Complex is a short series of manga one-shots revolving around the lives of the various members of the aforementioned Sakamoto family, and is written by Mikiyo Tsuda of Princess Princess fame, which is a sort-of sequel to this manga.

Not to be confused with the similarly-titled Family Compo, a seinen manga about a young man living with his new transgender family.