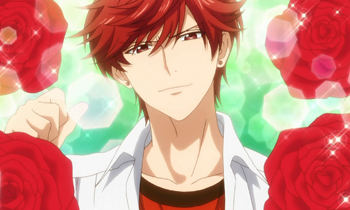 "Edward's skin, white despite the faint flush from yesterday's hunting trip, literally sparkled, like thousands of tiny diamonds were embedded in the surface."
— Twilight
Advertisement:

In anime, attractive men and women walk around in a cloud of sparkles. Maybe they're just so pretty that light, like members of the opposite sex (and occasionally the same sex), behaves strangely around them. Maybe Anime Land pheromones take the form of glowing, colorful diamonds of light. Nobody really knows.

Or maybe it's just the fact that Generic Cuteness makes it hard to visually show the really beautiful people. Furthermore, this is usually shown when it's from the point of view of the person looking at said bishie, visually conveying their attraction.

It is highly likely that since traditionally and culturally in East-Asian countries (China and Japan) you can metaphorically say that charismatic people shine (Japanese 眩しい, "radiant"), the sparkles visually show the shine without blurring the characters themselves.

This trope has been used so often that some examples will even employ the Bishie Sparkle out of an intense commitment to irony, or humorously. In these cases, the effect might be accompanied by an Audible Gleam to accentuate their luminosity.

Most Western examples have been references to Japanese examples, but with the popularity of Twilight, that might be beginning to change.

The effect also applies to cute couples, including lesbian ones but especially gay ones.

A Sub-Trope of Everything's Better with Sparkles. Related to Gaussian Girl, Love Bubbles and Crush Filter.

Example of:
Cannot Spit It Out