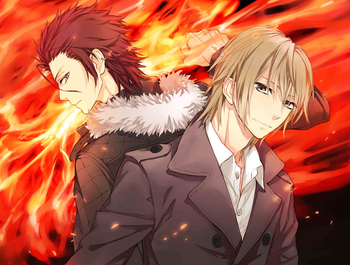 "In Shizume city, there is a legend...about a Red King with demon-like abilities.
The King singlehandedly created the Homura organisation. If you are accepted into Homura, you can gain extraordinary power."
Advertisement:

On the streets of Shizume city, rumors of a clan whose King possesses extraordinary powers circulate. If one is accepted into Homura by the Red King, Mikoto Suoh, they can gain the power of fire.

Starting with the entrance of their newest member, Shōhei Akagi, a young optimistic man, the story details the everyday lives and tribulations of the members of Homura.

A prequel to the Fall 2012 Anime K, the manga began publication in Kodansha's Aria magazine on May 2012.

This manga shares a character page with K.