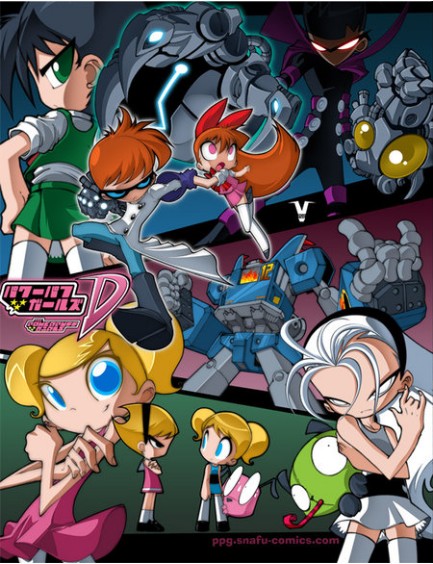 Crossover Madness, thy name is PPGD
"The laws of probability, my friend. The laws of probability and physics, dictating maybe a little chaos theory? And if you ignore our imminent oblivion, I would say it is, if you'll forgive me for speaking in perhaps the layman's terms: Bright and Beautiful."

In 2004, a fanartist named Vinson Ngo, a.k.a Bleedman, somehow got it into his head to draw a manga-styled Mega Crossover with every popular cartoon he could think of, recent and past, and blend them all together for a Fan Webcomic centered on the three superhero tykes known as The Powerpuff Girls.

The result was Powerpuff Girls Doujinshi

(a.k.a. Powerpuff Girls D or PPGD) which combines the universes of Cartoon Network and Nickelodeon as well as a few other outside sources and original material, and places them in a town called Megaville, a neighboring city of Townsville in this universe, where malevolent forces are poised to attack.

Be warned, though — blood, death, and sexual themes are heavily featured, placing the characters in situations in which one wouldn't normally see them. The story itself is something of a Round Robin, heavily based on fan-input.

Gained a massive following on DeviantArt

. Updates have been sporadic but recently pretty steady due to Ngo also working on the crossover fancomic Grim Tales from Down Below and his original series Sugar Bits. He also said to have took on another Snafu member's project, Invader Zim: Manifest Doom, though he has yet to work on it. He's a busy man.