Webcomic / Grim Tales from Down Below 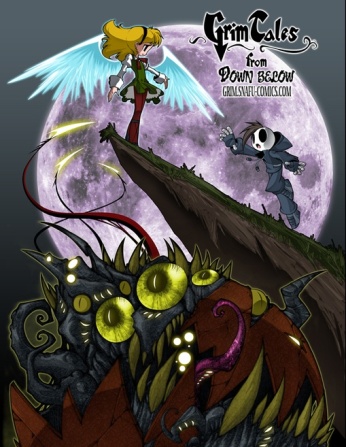 Follow me to the edge of madness. and don't forget to send Jack a postcard from Yog-Sothoth.
Advertisement:

The second crossover Webcomic from Vinson Ngo a.k.a Bleedman (the first being Powerpuff Girls Doujinshi), created in late 2004 (roughly a year after PPGD was started). Grim Tales from Down Below

is a fan-comic based on fanfics, focusing on two characters created by E.R.M Griffin (DeadDoll00), the children of Grim and a now adult Mandy, from The Grim Adventures of Billy & Mandy, who in this Alternate Continuity are the king and queen of the underworld: Grim Jr. (a.k.a. Junior) and his patchwork sister Minnie (short for Mini-Mandy), while incorporating an origin fanfic for the two which was written by SonicRose.

before Ngo moved it to Snafu-Comics. Already well known, Grim Tales added more readers to Ngo's already overflowing fanbase. Ngo has a penchant for incorporating Narm, and Darker and Edgier, and extreme Fan Disservice in his works, and as such, the comic has garnered some controversy, particularly regarding a plot point within the comic dealing with real-life events.

After six years, the main series eventually finished in June 2009 and was apparently the end to the series. However, Ngo unveiled he was working a short sequel called AfterBirth

which apparently deals with Minnie coping with her agelessness and being left alone after Junior sets out on a life of adventure. Here are some preview pics of the comic.

This story, however, has been stated to be non-canon.

In February 2011, the comic continued with a mini-series called Grim Tales: What About Mimi

(GT: WhAM). The comic follows Mimi, who is sent into the Grims' household to locate an object of immense power for him. During said mission, Mimi's past is brought to light bringing many shocking swerves with it. That eventually ended in July 2012.

(GTFO), which is a collection of short stories featuring the main characters.

After the aforementioned GTFO ended with the first "Mimi" file, he began on Grim Tales: Chapter VIII (Eight) in April 2013.

Yeah, if you haven't guessed by this point, Bleedman really loves working on this series.

If you're intrigued by all of the above, then commence reading

, is uploaded fully on the wiki. (Warning: you will have to navigate carefully to avoid spoilers.)

Not to be confused with Grim Tales, a series of PC hidden object games about a time-traveling detective.

Now has a Character Sheet. Feel free to contribute.

Grim Tales from Down Below provides examples of: