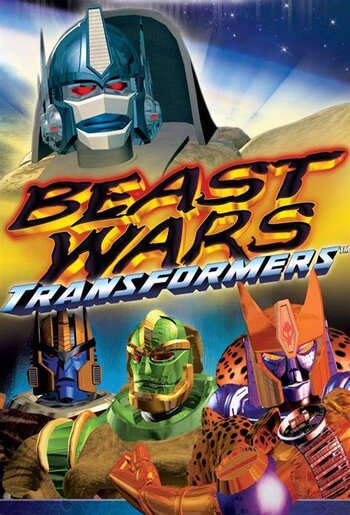 The Maximals model their wide wardrobe of fur and leather coats.
"Megatron may be back, and there is still more Energon. If they ever get enough, they could conquer the galaxy. So for now, let the battle be here, on this strange, primitive world. And let it be called Beast Wars!"
—Optimus Primal, "Beast Wars (Part 2)"
Advertisement:

The series that revived the Transformers franchise after a years-long recession,note In terms of television that is, both the toyline as well as the comics had remained popular way into the 90s Beast Wars was a fully CG-animated series that premiered in 1996. It was produced by the now-bought-out Mainframe Entertainment, hot on the heels of its predecessor, ReBoot (in fact, its' first season aired as part of the syndicated "Power Block" (distributed by Hasbro's Claster TV firm) alongside ReBoot, G.I. Joe Extreme and Vor Tech). Hugely controversial at the time among purists for the massive changes to the Transformers formula, most prominently the change from vehicles and electronics to animals. "TRUKK NOT MUNKY!" was a common cry of its detractors of the time.

Beast Wars takes place in the far future of the Transformers: Generation 1 franchise, though it never refers to enough specifics to figure out which Generation One (cartoon, comics or something else), and the events of the "Great War" are Shrouded in Myth. After the war ended with an Autobot victory, an uneasy truce has existed on Cybertron for many centuries. During this time of peace, the Transformers were reformatted into smaller, more energy-efficient bodies; the descendants of the Autobots are known as the Maximals, and the Decepticons have become the Predacons.

A Predacon rogue steals a precious artifact from the Cybertronian archives and names himself Megatron after the historical Decepticon leader. The artifact contains the coordinates of a planet ripe with energon and Megatron escapes into space with it and a small band of followers, intent on acquiring enough energon to instigate a full-scale Predacon rebellion. The only ship able to pursue is crewed by a team of scientists and researchers led by Optimus Primal (no relation to Optimus Prime beyond name — at least not in this continuity). Their ships crash on an unknown foreign world, similar to but not quite exactly the same as pre-historic Earth. The planet does have energon, but too much of it and it is in a raw, unstable form, and prolonged exposure would short out their systems and send them into stasis lock. To bypass this the two sides adopt "beast modes" based on the planet's native lifeforms, which they can use to move about outside their ships without risking overexposure.

Against this backdrop, the Beast Wars between the Maximals and Predacons begin. The Maximals want to go home and let the proper authorities deal with Megatron, but the hope for rescue is slim, as their ships had trans-warp engines that let them travel through space and time, so they could be anywhere, anytime, in the galaxy. The plan is that if they can subdue the Predacons, they can turn their attention to repairing their ship or finding a way to contact Cybertron. As for the Predacons, while the bulk believe they are here just to acquire energon to take back to Cybertron, Megatron had a secret, ulterior motive for coming to this specific planet at this specific point in time — the true identity of the planet and why Megatron came here serve as big reveals in the second season. The two sides must also deal with a third party, Sufficiently Advanced Aliens known as the "Vok" that have a presence on this alien world and don't like the Transformers interfering with their plans for it.

Despite its detractors when it began, Beast Wars was actually quite innovative for its time, not only because of the aforementioned CG, but also because of the tight storyline and significant character development. The show made attempts to push the boundaries of contemporary children's shows via witty wordplay and graphic violence that was let slip because flying robot parts have been permissible since time immemorial. The expense of CG animation at the time (each episode cost about $700,000 during Season 1, as an example) required a limited cast of characters, unlike the 1984 series's cast of dozens. Although this, too, was decried at the time, it meant more time was spent with each character, so they developed distinct personalities and dynamics with each other, and most of them got ongoing story arcs and character development across multiple episodes. It also meant that when a new character was introduced, an existing character was killed off, or someone got a significant upgrade that affected their appearance, it was treated as a big deal and would be a lasting, permanent change (most of the time, anyway).

On the toy side, the toys made much larger use of ball-joint technology than the Generation 1 toys did, and this meant the Beast Wars-era toys were a huge leap above the originals in playability; they had much better articulation, their joints were less prone to damage, and since the toys were being made with intent to tie into the cartoon this time instead of Hasbro creating a cartoon based on pre-existing toys, the characters looked more similar between the two formats. The toyline was not without its problems, though. "Shell-formers" is a fan term used for Transformers where their alt mode just opens up and the robot climbs out with their alt-mode pieces folding up and hanging off of their limbs, and the fandom generally dislikes this. These kinds of toys existed before Beast Wars, but they were a lot more of them here.

The voices of Optimus Primal and Megatron, Gary Chalk and David Kaye, would return to voice Optimus Prime and Megatron in the Unicron Trilogy. If you didn't grow up on the voices of Peter Cullen and Frank Welker, you probably grew up with these guys.note And for some irony, Kaye would voice Optimus Prime in Transformers: Animated, and for the G1 Megatron's cameo in this series Chalk did a Frank Welker impression. This makes them the only two voice actors to have voiced both Optimus and Megatron in some incarnation.

For its flaws and strengths, Beast Wars set the standard for all other Transformers franchises from then on, both in toy and in cartoon format. Even now, it just won't die; a "10th Anniversary" release of the original toys was created (with new figures for Primal and Megatron), and fan favorites Blackarachnia and Waspinator were carried over into Transformers: Animated. The franchise got a massive tribute for its 25th anniversary in the form of the Kingdom toy line portion of the War for Cybertron trilogy, with much of this show’s cast featuring in the show’s third season. To some, Beast Wars is the best Transformers incarnation of all time due to its high quality and production values. It isn't uncommon for longtime Generation 1 fans to claim that the show is their favorite Transformers series.

The Sequel Series, Beast Machines, was... less well-regarded, due mainly to characterization changes, a focus on longer plot arcs, being too preachy, and a darker tone in general. The massive redesigns that the Beast Wars cast underwent were also a huge factor in its reception. Despite this, it has its own fanbase. See its own page for more information.

In Japan, two traditionally animated series were created to fill in the production gaps between seasons, Beast Wars II and Beast Wars Neo. They were never dubbed, as they don't fit in very well with the continuity of either the source material or each other. Both shows are much more lighthearted than their Western counterparts and aimed at a much younger audience than Beast Wars (which could plausibly be called the first Transformers series aimed at teenagers, not just children). In addition, the Japanese release of the CG Beast Wars cartoon also changed the dialog for a younger audience, almost to the point of being a Gag Dub.

During the line's heyday there were a few spinoff lines, including Machine Wars (a KB Toys exclusive line featuring vehicular TFs that were redecos of European molds, and was an early attempt at reintroducing character with vehicular altmodes instead of animals, but it quietly faded away) and a tie-in line with Animorphs that wasn't well-received by either fanbase.

It was announced in 2021 that the first follow-up to Bumblebee was a crossover film involving the Maximals and Predacons facing the Autobots and Decepticons, titled

Transformers: Rise of the Beasts, to be released in 2023. The film is so far confirmed to feature Optimus Primal, Cheetor, Rhinox, and Airazor.

Here's a Character sheet. Now updated with characters from the Expanded Universe. Please feel free to add to it.