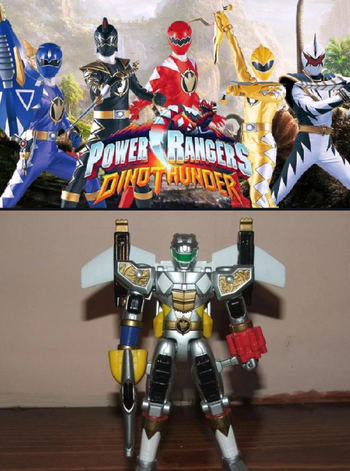 Above: the characters that were actually in the show.
Below: the one that wasn't.
Merchandise-Driven works exist to sell The Merch, as you would expect, and characters who have merch are expected to appear in the work itself.
Advertisement:

Not with these guys.

This trope refers to a character who only appears in toys and merchandise but not the actual work. When a series is made into toys (or vice-versa), writers must conceive a role for a character to play in the story, and toymakers must have a reasonable amount of merchandise to sell as part of an assortment, thus resulting in several characters never appearing in fiction and only appearing as toys. Alternatively, it may be easier for toymakers to Palette Swap an existing toy into a new character to keep the line going. Perhaps someday some writer will love them all.

Sub-Trope of Canon Foreigner. See also Environment-Specific Action Figure where the an existing character's costume is exclusive to a toyline. The polar opposite would be Toyless Toyline Character where a character exists only in fiction and not in The Merch.