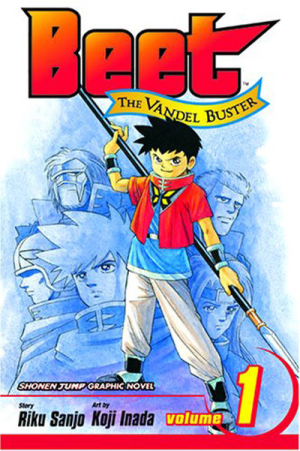 Vandels!! In this story, that's what we call evil creatures with magical powers. Hidden in darkness, one day they appeared on the surface of the EARTH, multiplying monsters and destroying the peace and order of human society. Years have passed since that day. People call this seemingly endless era... the Century of Darkness.
Advertisement:

The one and only line of defense humanity has against Vandels are the Busters: mercenaries who have taken up the task of facing off with the Vandels for peace, glory, money, and as many other motivations as there are stars in the sky. Our story focuses on Beet, a boy who chose to become a Buster in emulation of his idols, a Buster team called the Zenon Warriors. However, when Beet gets in the middle of their fight with Beltorze, one of the most powerful Vandels around, he is critically injured. The Zenon Warriors give their most powerful magical weapons, their Saiga, to Beet so they can save his life. What became of them after that is unknown, but Beltorze still exists.

Three years later, Beet has become a full-fledged Vandel Buster and, with the Zenon Warriors' Saiga on one side and talented True Companions on the other, Beet has set out to bring an end to the Century of Darkness.

Beet the Vandel Buster (Japanese title: Bouken Ou Beet, literally "Adventure King Beet") is a shonen manga written by Riku Sanjo and illustrated by Koji Inada, the same writer-artist team behind Dragon Quest: The Adventure of Dai. The manga began its run in Weekly Shonen Jump in 2002, but went on an indefinite hiatus in 2006 after Inada became ill, leaving much of the story unresolved. The manga would finally continue 10 years later after the manga moved to Jump SQ Crown in late 2016, but then went back on hiatus a few months later; it started up again in 2018 after moving to Jump SQ Rise (as Crown had ceased publication).