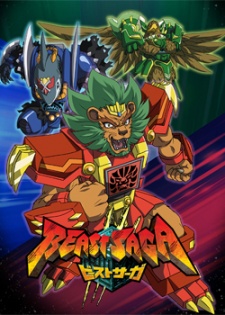 Beast Saga is the Spiritual Successor to Battle Beasts/Beastformers of Transformers: ★Headmasters, created by Takara Tomy.

Beast Saga takes place on a distant planet in our galaxy called Beast where three beast tribes — the Sea Tribe, the Land Tribe, and the Sky Tribe — fight for their honor. Each of the tribes protect an infinite elemental power source called "Godlot." Each Godlot is split into 3 parts, Head, Body, and Bottom, and are located in different areas of each kingdom.

The series mainly focuses on the Land Tribe, the Kingdom of Gloria, and it's King, a lion by the name of Liogre, as they fight against their enemies, specifically the Deathheart Gang from the Water Tribe.

The first anime ran on TV Tokyo from January 13, 2013 to September 29, 2013, It consists of 38 episodes, each about 12 minutes long. The December 2013 issue of Shueisha's Saikyo Jump magazine announced that production on a second series has been green-lit, but will be Direct to Video only. The announcement reveals that the setting of the anime will change to the “sky,” and that the “development” will unfold at DVD rental stores.

The manga runs in Shueisha's Saiyoko Jump, starting from August 3, 2012 and is currently ongoing.

Other than the anime and manga, the series also has hobby toys, a dice battle game, and a 3DS game which came out on July 25, 2013 in Japan.

Its page on The Other Wiki is here