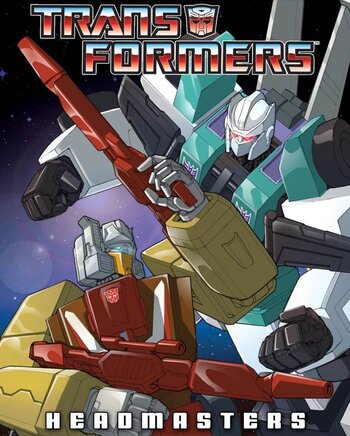 Transformers: The★Headmasters is an anime series which aired in 1987, continuing the story after the end of the third season of The Transformers and ignoring the events of "The Rebirth". The evil Decepticons, supposedly defeated at the end of G1, attack the Autobots' home planet of Cybertron, aided by new allies, the Headmasters. Just when things look their bleakest, a group of Autobot Headmasters suddenly appear to turn the tide. So of course also do the Decepticons.

The show concerned the continuation of the war between Autobot and Decepticon, focusing on the Headmasters and, later, their Targetmaster allies. As time went on, most of the original characters were phased out to allow the new toys to take centre stage.

The majority of the new characters were members of two subgroups of Transformer, who were fairly evenly split between the two main factions.

, the show settled back into the generally episodic format of its predecessor. Continuity was much stronger in Headmasters than in Generation 1, with the result that even though the majority of episodes are self-contained, they still have to be watched in the correct order. Unfortunately, long stretches of time spent with the characters standing around doing not very much, and the fight scenes seem to be present to pad out the episode and resemble more of an impromptu laser dance party than an actual fight.

On the other hand, the animation was taken back by Toei, which resulted in a considerable improvement in quality. Animation and continuity errors were rarer, albeit still present on occasion.

This show was somewhat darker than G1. Several episodes included on-screen deaths (mostly robots, but also some aliens encountered along the way), and the Autobots lost battles as often as they won. This all meant that Scorponok didn't suffer Villain Decay, and Galvatron regained a good deal of the threat he had lost in G1.

The show received a hilariously bad English dub by Omni Productions in Hong Kong, which gained notoriety after being broadcast on StarTV in Singapore. While the dub was perfectly comprehensible, it did contain some "Blind Idiot" Translation, which spawned a few short-lived memes. If you were English, Mindwipe's hypnotism somehow became 'magic', proving that whoever translated the show didn't even read the title before they started. There was also no attempt to replicate the G1 voice actors in English despite the Japanese dub doing so, resulting in characters like Dummy!Blurr and Intellectual!Grimlock. And though the Japanese Galvatron still sounded suave and leaderly in Japanese (whether you understand Japanese or not) in English he sounded like somebody who kicks people in the balls for a living. The series has since received several fandubs that are much more professional-sounding.

The first episode of the dub was included as a bonus on the DVD edition of the animated Transformers movie. DVDs containing both the dub and the original Japanese with subtitles were released in Australia and the U.K. in 2005, and both versions were shown in the UK on Anime Central in 2007. Shout! Factory released the series in the U.S. on July 5, five days after Transformers: Dark of the Moon opens. The dub was not included, due to Hasbro's apparent concerns about content and quality.

Currently the fan group "Prime Productions" is working to create a proper dub of the series, with completely new voice overs and a new team of writers. Information on the project can be found on the group's YouTube page

The Headmasters create a circle powered by their friendship to finally eliminate Galvatron.

Example of:
The Power of Friendship

The Headmasters create a circle powered by their friendship to finally eliminate Galvatron.