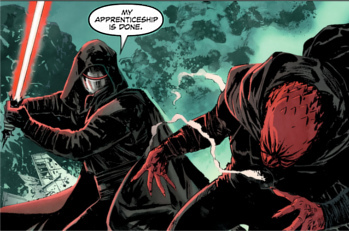 "Luke, you can destroy the Emperor. He has foreseen this. It is your destiny. Join me, and together we can rule the galaxy as father and son!"
— Darth Vader, Star Wars: Episode V – The Empire Strikes Back
Advertisement:

The Big Bad has an assistant or sidekick to whom they spend a lot of time bragging to about just how clever they are. Near the end, their assistant double crosses them spectacularly while their back is turned. Essentially, this is Deceptive Disciple, except that the Bastard Understudy is apprenticed to an Evil Mentor.

The Starscream is a visible rival who lacks the Bastard Understudy's loyalty and patience. The Dog Bites Back is when the betrayal is not premeditated. May be a form of Thanatos Gambit. See Magnificent Bastard, Manipulative Bastard, Villain Takes an Interest, and The Chessmaster for characters who are likely to have one of these around. May overlap with Dragon with an Agenda. Definitely overlaps with Rule of Two.