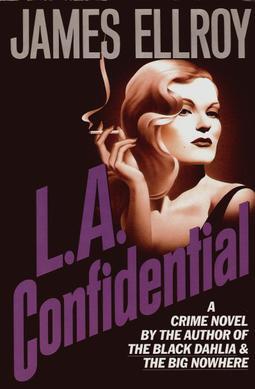 "A glory that costs everything and means nothing—"
— Steve Erickson
Advertisement:

A 1990 novel by James Ellroy, making up the third, and by far the longest installment of his "L.A. Quartet" series. Spanning nearly the entirety of the 1950s, this crime epic follows the investigations of three L.A.P.D. officers as they gradually unravel a dense, intricate web of criminal conspiracies, connecting murder to drugs to pornography to showbusiness to police corruption.

Bud White is a tenacious, brutal cop with a soft spot for women and a cruel streak toward woman-beaters. Jack Vincennes is an underachiever who coaches actors to play cops, haunted by a shooting from his past. Edmund Exley is a political climber and an idealist, desperate to escape his father's shadow as a legendary detective himself. The three of them, each following different cases, gradually uncover a sprawling conspiracy in the criminal underbelly of Los Angeles.

A film adaptation was released in 1997, though the sprawling novel was significantly condensed and altered. Two separate attempts at series followed, in 2003 and 2018, but neither pilot was picked up.