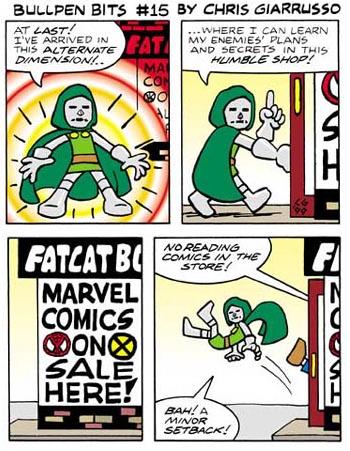 Still, a good use of Medium Awareness.
Kryten: Ah, Mr Charles, sir! My name is Kryten. I'm a fictitious character from the television series Red Dwarf, and we really need your help.
Lister: You're the only one who can help us, man!
Craig Charles: I've heard about these! They're called flashbacks! I know you don't exist!
Cat: OK, no need to rub it in!
— Red Dwarf: Back to Earth
Advertisement:

The work opens with one setting, and introduces several characters living there. But after establishing this outer setting, the narrative switches to yet another setting within the first one, a Show Within a Show with its own, separate cast. The characters from this Show Within a Show, due to some Applied Phlebotinum, manage to find their way out to the first setting and meet the characters we were introduced to there. The intended effect is to make the audience believe that the characters have broken through the Fourth Wall and entered your reality. Stories with these plots are popular because of Deconstruction and Lampshade Hanging jokes, as well as Take That Me humour. Sometimes it's a form of raising the stakes, as at least two worlds may now be in trouble.

Very similar to Real World Episode, where the initial characters we're introduced to leave their setting and find their home is a Show Within a Show. Using either trope implies that All Fiction Is Real Somewhere and can be paired with a "Reading Is Cool" Aesop.

Compare Mage in Manhattan (where a powerful villain from another world, but not always another fiction, comes to assault the world of the audience), Up the Real Rabbit Hole (where the "topmost" universe is recognized as the "real" one), Tomato Surprise (where we learn the protagonists are not what we expected them to be), and Tulpa and Dream People, where imaginary beings take on a physical existence. Contrast Trapped in TV Land (character is sucked inside a Show Within a Show).