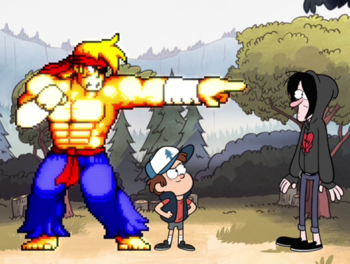 "HOW CAN YOU LAUGH, WHEN YOU KILLED THIS BOY'S FATHER?!?!!"
Advertisement:

At the Gravity Falls Video Game Arcade, tensions mount between Dipper and Robbie. Robbie is unusually threatened by a twelve year old boy trying to "steal" his girlfriend, and Dipper is still convinced that a chick as cool as Wendy deserves someone much cooler than Robbie. As Wendy is going camping with her family this weekend, Robbie declares a fight between the two of them to settle things once and for all.

Dipper is quickly dismayed when he realizes how completely outmatched he is. Even Grunkle Stan would bet against him. But things start to look up when, hiding out at the arcade, Dipper finds a cheat code scratched into the side of his favorite game, Fight Fighters. When he unlocks it, Dipper finds he is able to bring his favorite character, world fighting champion Rumble McSkirmish, to life! Now that'll scare the daylights out of Robbie, for sure!

Except things get out of hand rather quickly...

Meanwhile, Mabel tries to cure Stan of his fear of heights.