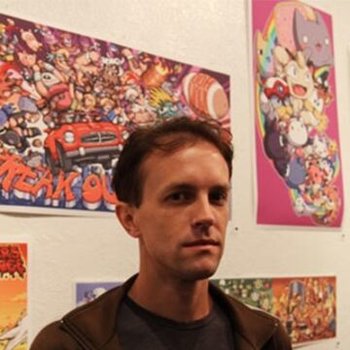 Paul Robertson (born 1979) is an Australian animator known for his complex pixelized, video game-inspired art style. He did indeed start as an artist and animator for several video game companies, while still making quite a few surreal animations and short films to be used as music videos or showed at animation festivals.

He became a well-known name among the gaming community after working as the art director for Scott Pilgrim Vs The World, and then outside the community for providing the animations of two characters from Gravity Falls: Rumble McSkirmish and Giffany (notice a pattern here?). Since then, his unique style has been spotted in several places including the retro-flavored games by Tribute Games, the Couch Gag from the "My Fare Lady" episode of The Simpsons and several promos appearing on Adult Swim.

Not to be confused with Robert Paulson, or Rob Paulsen.note Great, now I'm confused.

Works by him with pages on TV Tropes:

Tropes found in his body of work: