Why Did It Have to Be Snakes? 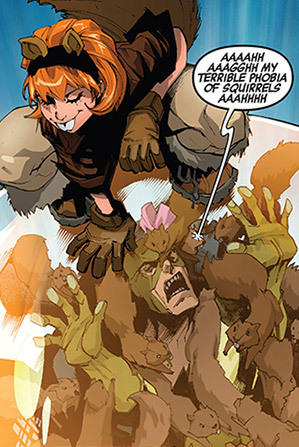 Boy, did you pick the wrong girl to tangle with.
Agatha: Yesterday you took out a whole army of war clanks!
Gil: That was a small army. This is a big spider!
— Girl Genius

A seemingly invulnerable character reveals that they are deathly afraid of X... therefore, X is certainly going to be a recurring obstacle, no matter how unlikely. The Trope Namer is a line in Raiders of the Lost Ark, reminding us that Indiana Jones hates snakes (ophidiophobia

) when he discovers that the Well of Souls is crawling with them.

A subset of Fatal Flaw. Fear of Thunder (also known as brontophobia), Spiders Are Scary (arachnophobia)

, Claustrophobia, Afraid of Blood (hemophobia), Afraid of Doctors (iatrophobia), Bee Afraid (melissophobia) and Afraid of Needles (trypanophobia) are specific sub-tropes of this.

This is common in horror/sci-fi stories dealing with a "master of fear" (such as boggarts, Freddy, Pennywise, or the Scarecrow), in which the monster uses their powers to guess their victim's worst fear, and then use it against them to make them a quivering heap. Enemies who know about this weakness are prone to use Flaw Exploitation and as a way of coercing the hero. It can also overlap with The Dreaded. If an innocuous object causes fear that renders someone helpless, it may overlap with Weaksauce Weakness. Also compare Absurd Phobia, where an unusual (and usually non-plot relevant) fear is Played for Laughs.

As you can imagine, Truth in Television. Compare Primal Fear for examples where common phobias are gleefully exploited in horror fiction. No personal examples, please. Not to be confused with Reptiles Are Abhorrent, but it helps to explain it some.

Alternative Title(s): Phobia, Why Did It Have To Be