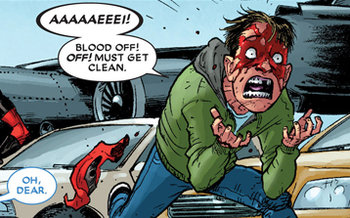 "No stomach for violence. I mean, literally. I see one drop of blood, that is me, done."
— Richmond Valentine, Kingsman: The Secret Service
Advertisement:

is an anxiety disorder characterized by extreme fear of blood. Treatments exist, but the condition tends to be lifelong and is usually caused by childhood trauma.

In fiction, being Afraid of Blood is much the same, though the symptoms tend to run a rather more colorful gamut from mere extreme discomfort or nausea to falling unconscious on the spot to awakening superpowered evil sides. Note that there is some scientific basis to this: physical reactions uncommon in most other phobias have been recorded in cases of fear of blood.

In the past, this trope was mostly associated with females, in both fiction and real life, which is why most Damsels in Distress share this condition (good thing there's No Periods, Period). In the present, this trope is usually Played for Laughs (or — with equal effort — for tragedy) by giving it to someone in a medical profession or other position where they're likely to see a lot of blood. If the character is justified in being afraid of blood, perhaps they fear The Power of Blood.

Subtrope of Why Did It Have to Be Snakes?. Compare Afraid of Needles and Afraid of Doctors. Contrast Hemoerotic and Blood Upgrade.