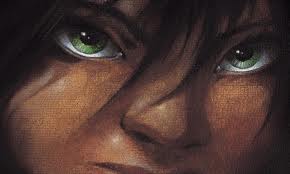 Look at me!
Advertisement:

The Shamer Chronicles is a series of children's fantasy novels written by the Danish author Lene Kaaberboel. There are four books in total: The Shamer's Daughter, The Shamer's Signet, The Serpent's Gift and The Shamer's War. The books are about Dina Tonerre who has unwillingly inherited her mother's Gift: the ability to elicit shamed confessions from even the most hardened wrong-doers, simply by looking into their eyes. Starting with the second book, her older and completely normal brother Davin becomes the second point-of-view character.

The story starts with Dina's mother being called to Dunark Castle to elicit a confession from the seventeen year old heir to the throne who is blamed for committing a bloody triple murder. Dina's mother promises to return as fast as she can, but the next day comes and she is not showing up. Which is when a yet another person comes from Dunark and takes Dina with him, telling her that Dina's mother needs her help.

In Denmark, the series is very popular and influential. Many young people credit it as one of the only books they've enjoyed reading, or the book that first got them into Fantasy or books in general. The theater that made The Musical have said that this is the reason they wanted to turn it into a musical.

The first two books were eventually adapted into live action films, which were respectively released in 2015 and 2019.