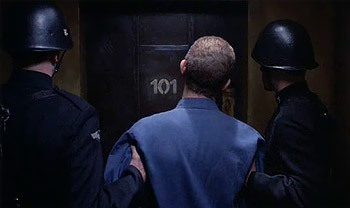 Welcome to Hell, Winston.
"You asked me once, what was in Room 101. I told you that you knew the answer already. Everyone knows it. The thing that is in Room 101 is the worst thing in the world."
—O'Brien, 1984 (Part 3, Chapter 5)
Advertisement:

A Place Worse Than Death. The place no one wants to visit: a torture chamber, brainwashing program or place of punishment so terrible that it is spoken of only in whispers. No one knows just what is done there; those who are sent there either never return, or else are so traumatized that they cannot speak of the torments they experienced there.

The Trope Namer is the room in the Ministry of Love from George Orwell's 1984, where it is eventually revealed that those who are sent there are made to literally live out their worst nightmares. No matter what spark of individuality you cling to – hope, love, loyalty, whatever it is – you WILL betray it in Room 101. You then irrevocably cross the Despair Event Horizon. As one character says, "You really do mean it, and nothing is ever the same afterward."

Many that take after the 1984 example also tend to mimic the seemingly-mundane name of the room, being structured to just a location and a number. The way it's treated and responded to by characters is what gives it its foreboding and terrifying aura.

When the threat is used humorously, it can sometimes be known as the Maximum Fun Chamber, or involve Cool and Unusual Punishment and Suckiness Is Painful. Often, the audience has to Take Our Word for It that You Do NOT Want to Know what happens within. May also involve Animorphism. The widespread presence of these places in an Evil Empire may or may not be a sign of Industrialized Evil, depending on how personalized they are.

For the metaphysical equivalent see Cosmic Horror Story. The effect is the same, there's a... thing so terrible that it is spoken of only in whispers. No one knows just what it is; those who seek it either never return, or else are so traumatized (or, more likely, are driven so completely insane) that they cannot speak of the horrors they experienced by encountering it.

The name of the Orwell room inspired a TV series of the same name, in which celebrities sent their pet hates (including, in one controversial case, the Welsh) to Room 101.

Can be a Sealed Room in the Middle of Nowhere. Can also overlap with Place Worse Than Death. No relationship to Subject 101. Or Room 222

, for that matter — unless the Ministry of Love knows the single episode of a soap opera can drive you nuts.

While rarely used in Real Life even by the most vicious dictators and terrorists, aside from the odd instance like using dogs (or cockroaches in the case of one suspected terrorist leader) to torment a prisoner afraid of them, this sort of torture shows up a lot in film and television because actual torture tends to be pretty simple and brutish. Showing someone getting beaten up for hours, or even extremely bloody historical tortures like ripping out fingernails, doesn't make for very interesting drama, while having icy interrogators making vague but chilling threats about "your worst nightmares" or "destroying your will to live" multiplies the suspense. O'Brien in 1984 sounds far more eloquent than his real life counterparts in the USSR, who mostly spoke in crude threats and profuse swearing, since the book is supposed to represent a nightmare of totalitarianism rather than the real thing, which was a lot more shambolic, though no less brutal. Related to Psychological Torment Zone (a Location 101, if you will) and Black Bug Room (the Mental World equivalent).