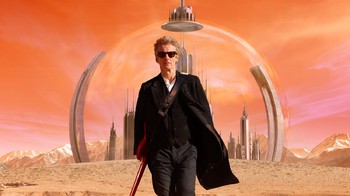 The darkest the Twelfth Doctor will ever become. And we're not referring to the new coat he's wearing.note Haven't heard that joke in a while...
Click here to see the Radio Times magazine poster for this episode: 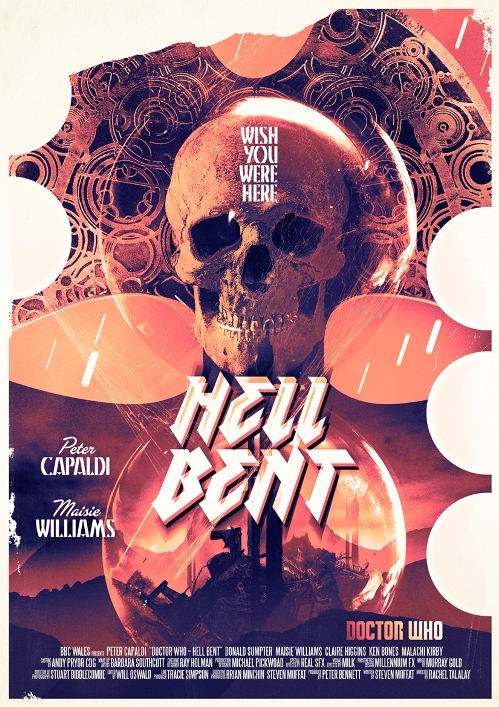 Welcome home.
Clara: Is it a sad song?
The Doctor: Nothing's sad till it's over. Then everything is.
Clara: What's it called?
The Doctor: I think that it's called "Clara".
Clara: Tell me about her.
Advertisement:

The one where a man risks undoing the fabric of reality in order to save the woman he loves. Or...

The one where the Doctor comes home. With a vengeance. God help anyone in his way.

And Clara comes back with her life stuck on pause. We see a gender-swapping regeneration unfold for the first time. The Doctor travels to the very absolute final end of time for the first time, and hashes it out with Me. And then has his memories of Clara wiped clean as a result of going too far... again. And she travels off with Me, both freakish functional immortals, while the Doctor is left with way more questions than answers.

And we're left with way more questions than answers.

Written by Steven Moffat and picking up where "Heaven Sent" left off, this is the Series 9 finale of Doctor Who, revealing the fate of Gallifrey post-"The Day of the Doctor" and wrapping up (at least for now) both the "Hybrid" Story Arc and the story of the Doctor and Clara Oswald.

The Doctor has escaped his confession dial, and had literally punched his way back to Gallifrey. And he's furious at those who put him in there for billions of years. He's angry enough to overthrow the Lord President Rassilon in a bloodless coup, and banish him. But his true goal the entire time has been to try and save Clara Oswald from her death by quantum shade on Ashildr's trap street. As her death is a fixed point in time, one that can't be cheated by doing something like sending a duplicate in her place, if he succeeds the space-time continuum will be destroyed. He's gone near-completely mad from his eons of imprisonment inside the dial; though he knows he's going too far, he's sure he can save both her and the universe, and his ordeal prevents him from being able to see reason.

Surrounded by people who can never understand, much less empathize with, his anguish, who will be the one who convinces the Doctor to stop and be himself again?

And how does he get to Nevada to tell this story to a familiar-looking waitress?

Run you clever boy
And be a Doctor