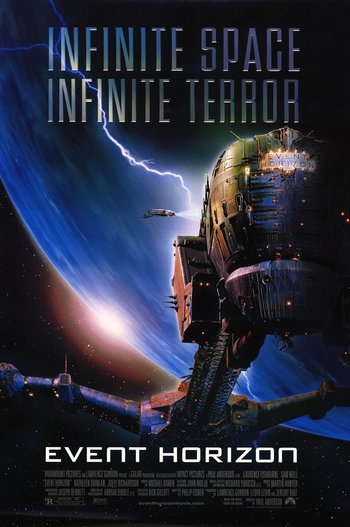 In the grim darkness of the not too distant future...
"I created the Event Horizon to reach the stars. But she's gone much, much farther than that."
— Dr. William Weir
Advertisement:

A 1997 Sci-Fi Horror movie by Paul W.S. Anderson where astronauts investigate an experimental ship (the eponymous Event Horizon) that disappeared under mysterious circumstances.

In the year 2047, a signal from the starship Event Horizon is picked up on Earth. The ship had disappeared without a trace beyond Neptune seven years earlier. The ship has reappeared in a decaying orbit around the planet Neptune, and the rescue ship Lewis and Clark is dispatched to investigate. The ship's crew is commanded by Capt. Miller (Laurence Fishburne) and carries the Event Horizon's designer, Dr. William Weir (Sam Neill).

No definitive trace of human life is found; inconclusive sensor readings lead the Lewis and Clark's crew to enter the Event Horizon to search for survivors. Things start to go very wrong very quickly, it appears that someone—or something—is toying with them. Strange noises echo throughout the ship, sensors indicate the presence of life forms even though the vessel is clearly deserted, and what few records the Lewis and Clark's team recover hint that something went terribly wrong... and that's just the beginning. Before long, the question is no longer what became of the Event Horizon, but what has the Event Horizon become?

Event Horizon is a Cosmic Horror Story which can be interpreted as an updated H. P. Lovecraft story, a Haunted House movie IN SPACE!, or, as some like to think of it, a very disturbing prequel to the Warhammer 40,000 series.note Specifically, one set at the beginning of M3 (3rd Millennium AD), when humanity was first beginning to expand past Earth and colonize the Sol System (at some point of which they came to learn of the Immaterium's existence). Whatever dimension that the Event Horizon traveled through seems similar in nature to the Warp, and there are many telltale signs of corruption by Chaos.

Not to be confused with Moral Event Horizon, Despair Event Horizon, or the term for the region around a black hole from which light can no longer escape (though the eponymous ship is clearly named after it). For the game that was heavily inspired by the film, see Dead Space.