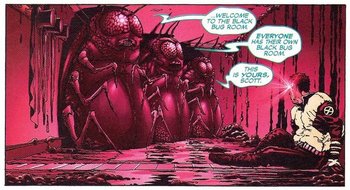 Where's the Raid when you need it?
"It doesn't kill you. What it does is make you feel like you're in a noisy little dark room...naked and ashamed...and there are things in the dark that need to hurt you because you're bad...little pinching things that go in your ears and crawl on the inside of your skull. And you know that if the noise and the crawling would stop...that you could remember how to get out...but you never will."
— Glory describing the effects of her brain suck to Tara, Buffy the Vampire Slayer
Advertisement:

The Evil Counterpart to the Happy Place and the darkest corner of the Mental World, the Black Bug Room is the place inside a person's head where all of their negative feelings dwell and fester. A person's consciousness may get sent there when their mind breaks under the strain, or other characters may end up there by taking a wrong turn during a Journey to the Center of the Mind, and permanent confinement there is to be avoided at all costs.

In movies, entering the Room is often shown with a Madness Montage. Compare Room 101 and Psychological Torment Zone for the non-metaphysical versions with all the same effects. Not to be confused with a Debug Room, or the Black Room of Death in Super Mario 64.