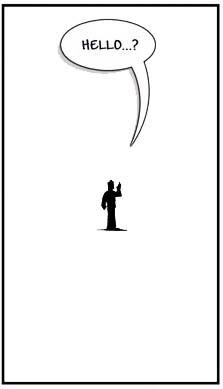 A dimension of eternal whiteness. A blank slate. It might represent eternity, nothingness itself, or it might be a Void Between the Worlds. Can also be a realm which exists only in the mind, or a Pocket Dimension. Could even be black, depending on the creator's preference. If this is used as a prison, expect it to be Sealed Room in the Middle of Nowhere.
Advertisement:

A room which appears to be a Blank White Void but actually has white walls, floor and ceiling is a White Void Room. Compare Featureless Plane of Disembodied Dialogue.