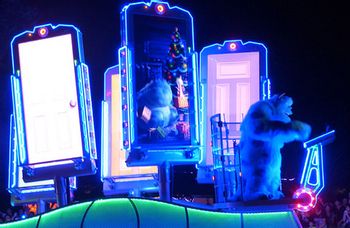 I found a door. An old oak door, standing unsupported by any other structure. I didn't know if it was an exit from the Dog Park or an entrance to something much worse, but... I went through it. Now I am in some old house...
— Dana, Welcome to Night Vale
Advertisement:

This is the extreme conclusion of Bigger on the Inside. Rather than being an item with interior dimensions fitting for the shape but larger, there is nothing but a lonely door to be seen on the outside. Of course, this door or portal does lead somewhere, somehow.

When a character opens the door and crosses it, they end up in a room, or even an entire place, that should have been seen from the outside. Sometimes, there is a building there, but it's invisible and the door is the only thing you can see. More often, it is a Portal Door leading to some other dimension or magical realm. In the latter case, expect the character to examine the door by walking all the way around it. (But don't expect the camera to show the door from behind, especially while it's open)