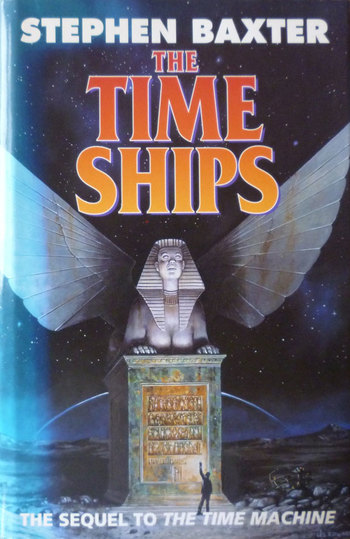 The Time Ships is the official authorized sequel to The Time Machine. It continues the original story, incorporating modern concepts such as Dyson Spheres and quantum physics. It was written by Stephen Baxter and published in 1995. It received the John W. Campbell Memorial Award and the Philip K. Dick Award in 1996.
Advertisement:

The story picks off with the the Time Traveller just having woken up, the day right after arriving back in Richmond, 1891. He eventually makes up his mind to go back to 802,701 AD in order to save Weena from her unfortunate demise. However, this time around he notices things are drastically different. Earth's rotation on its axis is halted, and he notices that the sun has seemingly gone out.

Before he can arrive at 802,701 AD a mysterious creature which the the Time Traveller refers to as the Watcher appears. This causes him to panic and stop the time machine. He falls out and finds himself in 657,208 AD. He eventually pieces together what happened. He realizes that a publishing of an account of his adventure by one of his friends caused humanity to take a different path, and advance on to become a Type II Kardashev civilization, causing the original future he visited to never occur. This resulted in the creation of a new kind of Morlock. Instead of becoming the beastly herders of the Eloi, they're now a race of scholars, living on the surface of a Dyson Sphere.

One of these new Morlocks, Nebogipfel, takes an interest in the Time Traveller, with the intention of convincing him to reveal the secrets of the Time Machine. After touring the sphere and looking at the advances of the new race of Morlocks, the Time Traveller decides to feign interest in cooperating, but instead use his time machine to go back to 1873 and stop himself from ever inventing time travel in the first place.

Things go from bad to worse as history starts to spiral out of control, and the Time Traveller can only watch as each timeline becomes more warped than the last.

It contains numerous references to the works of H. G. Wells.