My Future Self and Me 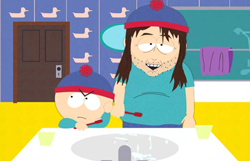 Brushing your teeth with your future self blows.
"When you travel around as much as I do, you're bound to run into yourself at some point."
— The Sixth Doctor, Doctor Who, "The Two Doctors"

A trope in which a character using Time Travel encounters himself in the future or the past, and goes to introduce himself. It is the opposite of Never the Selves Shall Meet in that the situation has no disastrous effects (at least not from the fact that the meeting occurred at all).

There are several reasons this could happen:

If the future version of the character remembers the meeting from the past, this could result in a Stable Time Loop, which means that the meeting was destined to happen since it, um, already did.

Might result in I Hate Past Me, Other Me Annoys Me, or a case of Future Me Scares Me. Compare Which Me?, Help Yourself in the Future, Alternate Self, or (gulp) Screwing Yourself. Contrast with Never the Selves Shall Meet.

The Falconer's future selves pile up, and "SNL" starts running out of actors to play him.

The Falconer's future selves pile up, and "SNL" starts running out of actors to play him.