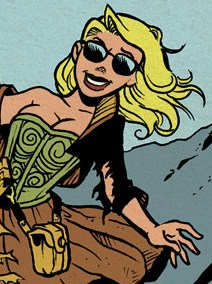 is an Urban Fantasy Webcomic, starring Lemme Addams. For the past 27 years, Lemme has been stuck in Another Dimension, until her buddy Sharky finally managed to get her out. For Lemme, it's only been a few hours, but now there's an awful lot to catch up on, and not just the usual Fish out of Temporal Water stuff, either. It seems that Lemme's dimension-hopping caused a Negative Space Wedgie to hit the Earth and well...stuff happened. Now Lemme has to deal with gods, demons, and an annoying sentient hologram. And we're just getting warmed up...

Lemme Addams is drawn by Sonny Strait and written by Billy Foster. Not to be confused with The Addams Family.