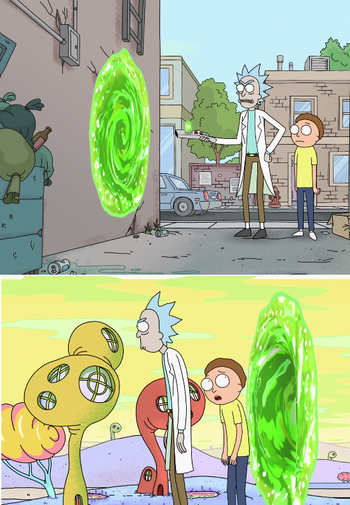 In 'N Out.
Advertisement:

A device that allows travel between dimensions/alternate universes/planes of existence/etc. This device could be anything, from a machine in science fiction to a magical item or spell in fantasy, as long as it allows travel between these dimensions or realities. It could even be a human (or, at the very least, a sentient being), if they have the power to go to these other "places".

There may be lots of Fridge Logic involved, depending on the nature of the device in question. For example, in the version shown in the image, where you open up a portal that doesn't need to be attached to the surface of a flat object, how do you ensure that the other end is always exactly at the surface of the desired planet (as opposed to high in the air or deep underground), and perpendicular to the ground? And if you decide to go exploring universes you've never been to prior (and thus have no data on what things are in it and where), how do you avoid, say, destroying your home planet by accidentally opening the other end in the interior of a sun? And even if you decide to be cautious about it, how do you gather data on said universe without actually opening a portal and sending a drone or probe in first?

Compare Time Machine and Inn Between the Worlds. If the device is bladed, it's a Dimensional Cutter.

See also Dimensional Traveler for someone who tends to use these.

The Portalizer is Nefarious's latest invention; a portal gun that reaches into other dimensions.

The Portalizer is Nefarious's latest invention; a portal gun that reaches into other dimensions.