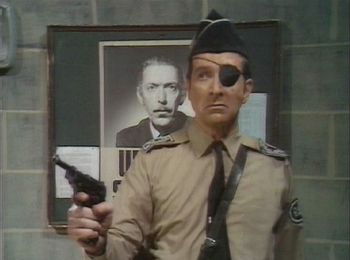 The one where the Doctor goes dumpster diving.

Written by Don Houghton. This seven-episode serial first aired from May 9 to June 20, 1970.

Doctor Who's first dabbling in an Alternate Universe. Professor Eric Stahlman theorizes that a new energy source, "Stahlman's Gas", lies beneath the Earth's crust and UNIT are providing security for the drilling operation to exploit this useful resource. The drilling strikes a green goo which regresses anyone who touches it into a beastlike "Primord", which is drawn to heat. Unfortunately, Stahlman is driven to disregard safety precautions, and he ignores every attempt at slowing down and being more cautious.

The Doctor's attachment to the project is two-fold. He's curious about the scientific effects of penetrating the Earth's crust, and he's using the power from the project's nuclear reactor to run experiments which aim to get the TARDIS operating again. While taking an accidentally overpowered test flight, he ends up discovering a barrier he can't get through, and his curiosity is piqued. However his altercations with Stahlman reach the breaking point, and Stahlman cuts off his nuclear power. The Doctor manages to restore it just long enough to take off again, but the power is again cut, trapping him in a parallel universe where Britain is a fascist dictatorship. The Brigadier is now Brigade Leader Lethbridge-Stewart (with an eyepatch and no moustache), while Liz Shaw struts around in kinky dominatrix boots. The Doctor does everything he can to stop the drilling, which is more advanced than it is in his universe, but he is ultimately unsuccessful and penetration zero is achieved with disastrous results.

One by one, the alternate versions of the base's staff make a Heel–Face Turn and join the Doctor's cause, but honesty compels him to reveal that he can't possibly save them — they'll all have to make a Heroic Sacrifice to get him back to his own dimension, and the only thing they can do is maybe save their regular world counterparts. The Brigade-Leader is killed while trying to force the Doctor to save him, and the Doctor escapes as the parallel Earth is destroyed.

Returning to the "real" world, the Doctor warns the others of the dangers, but is not believed. That is, until Stahlman himself is transformed into a Primord. The Doctor kills him with icy blasts from a fire-extinguisher and manages to stop the drilling just in time.

Finally, the Doctor announces that he's finished repairing the TARDIS console, that the Brigadier is a "pompous, self-opinionated idiot" and that he's leaving. He flips a switch and vanishes, only to reappear moments later through the door, explaining sheepishly that he materialised on the local rubbish tip.

The production team had been looking for an excuse to get rid of the old console prop, which had fallen into disrepair over the years and was becoming too much of a hassle to fix, and this seemed like the perfect opportunity. The next time the TARDIS console appeared, it was given a new prop that was mostly similar to the old one, but sported a sleeker, simplified central column fit for the '70s. The new design would last for the remainder of Jon Pertwee's tenure.

They also disposed of Liz Shaw in the gap between series — Caroline John had become pregnant, though no-one knew that at the time and it was just felt that the character wasn't working out. However, this decision hadn't been made at the time of filming, so Liz never got a "goodbye scene". One attempt to rectify this in the Expanded Universe was in the Missing Adventures novel The Scales of Injustice. Shortly beforehand, two texts stories in consecutive Doctor Who Yearbooks had a go. Over in the audio continuity, 2013's "Vengeance of the Stones" gave a different explanation for this and for how Mike Yates, who debuts in the next story, started working with UNIT — not the first time UNIT continuities got knotted in a twist.

The Doctor Who Expanded Universe takes the "fascist empire" angle and runs with it by having the tyrannical overlord of Earth be an alternate Third Doctor. (There is no indication of this in the actual story, which on the contrary heavily implies that the Doctor was only able to travel to that universe because he didn't already exist in it, but this is Hand Waved as it being a different incarnation, much like in the other multi-Doctor stories.) The novels claim that the face on posters of the dictator (actually that of BBC special effects expert Jack Kine) was also one of the faces offered for the Second Doctor to regenerate into in The War Games. However, it bears no resemblance to any of the ones seen in that serial, which were simple sketches.