Recap / Doctor Who S7 E2 "Doctor Who and the Silurians" 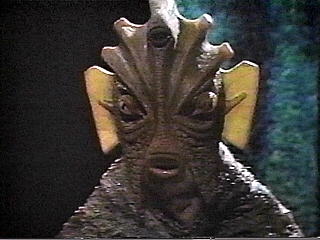 "Who is this 'Pertwee' guy? I was promised Peter Cushing!"
Elder Silurian: I have decided that it is possible for the two species to live together on this planet.
Young Silurian: This planet is ours!
Elder Silurian: This other species has developed its own civilisation. We must accept them as equals.
Young Silurian: I disagree! We must destroy them!
The Doctor: Brigadier, at all costs we must avoid a pitched battle.
The Brigadier: You don't still think we can co-exist with the Silurians, do you?
Advertisement:

The one with the botched title.

Written by Malcolm Hulke. This seven-episode serial first aired from January 31 to March 14, 1970.

The Brigadier sends for the Doctor and Liz to take a look at an underground laboratory working on a new kind of nuclear reactor. They're getting odd power losses, a bizarrely high level of stress-related illnesses among the staff, and a background music composer with an inexplicable kazoo obsession.

The Doctor investigates while Liz spends most of the story just sort of standing there, and they discover that a neighbouring cave system is the base for a group of intelligent reptilian bipeds which are (inaccurately, as it turns out) named "Silurians" from the geological period from which they date. They have been in hibernation for millions of years, but the power and heat from the new reactor have reactivated them, and they now wish to emerge and reclaim "their" world from the mammals.

The Doctor tries to broker peace and gains the trust of the Silurian leader, but the leader's rebellious underling takes power and releases a virus that will destroy humanity. The Doctor and Liz find a cure, but are then told that the Silurians have taken over the underground lab and are going to destroy the Van Allen Belt, bombarding the Earth with radiation deadly to mammals, but not reptiles. The Doctor gets them to retreat back into the caves by overloading the reactor and threatening an explosion. The Brigadier — to the Doctor's disgust — then orders the Silurian base destroyed.

The only Doctor Who TV story to be officially titled "Doctor Who and...", discounting brief references to the character as "Doctor Who" in an episode of "The Chase" (specifically the title of part 5, "The Death of Doctor Who") and the next episode preview for "The Savages". Legend has it this was due to an error by the first-time director in having the script prefix added to the onscreen titles (the title format stuck for the Target Doctor Who Novelisations, and was parodied by Big Finish Productions a few times). While "Doctor Who" isn't his name (not that anyone told WOTAN), the actor was credited as playing "Dr. Who" until 1970 and "Doctor Who" until 1981 (and again in 2005), and the character is frequently referred to in outside media as "Doctor Who" even to this day (likely to avoid confusion with other fictional doctors), so the Word of God on the subject is clearly a bit suspect. On another point of trivia, this was also the very last Doctor Who serial to be filmed in The '60s; location filming began in November of 1969. The next serial would be the first to actually be taped in the same decade it was aired, starting location filming in January of 1970.