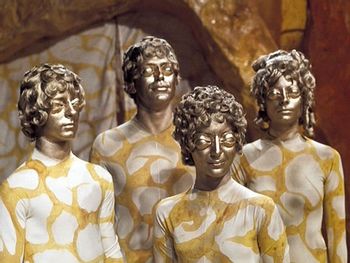 There are no people in this pic- oh, wait, there they are.
Overweight, underpowered museum piece... Might as well try to fly a second hand gas stove.
— The Master appraises the Doctor's TARDIS
Advertisement:

The one with killer entrails.

A spaceship arrives on Earth and golden-skinned humanoids say that their ship is damaged and that, in exchange for time to lay over and make repairs, they will offer humanity a substance called Axonite, which can cause animals to grow to huge sizes, ending world hunger.

However, the Doctor is sceptical and discovers the true form of the Axons — hideous tentacled monsters who have been invited to Earth by the Master to drain the Earth's energy. They, their ship and the Axonite are all in fact one single parasitic entity.

The Master is captured, but offered his freedom in exchange for helping UNIT and the Doctor defeat the Axons. The Master's plan is to use the TARDIS to absorb energy from a nearby nuclear power station, then release it all at once into Axos — but this is an inherently dangerous plan and the Doctor has a better one. He and the Master travel with the TARDIS into the centre of Axos, where the Doctor traps the ship and Axons in a time-loop from which it can never escape — but unfortunately, the Master does.