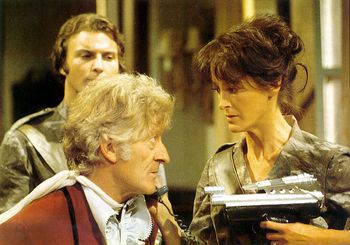 No, Tom Baker isn't the solution to the problem, put the gun down.
You don't understand. No-one who didn't live through those terrible years can understand. Towards the end of the 20th Century, a series of wars broke out. There was a hundred years of nothing but destruction and killing. Nearly seven eighths of the world's population wiped out. The rest living in holes in the ground, starving, reduced to the level of animals...
— The Controller tries to justify collaborating with the Daleks.
Advertisement:

The one with a three-Dalek army. Until 40-some-odd years later when they decided to do a reshoot.

Before The Terminator, there was "Day of the Daleks".

A peace conference is being held in Britain under the auspices of Sir Reginald Styles - it's a reconvening of the one from "The Mind of Evil", and UNIT are once again providing security.

Styles is attacked and nearly killed by a guerrilla fighter in futuristic dress, but is saved by the intervention of a big — well — gorilla fighter, who knocks the assassin out and disappears. The Doctor deduces that the unconscious man is from the future, and that a device found with him is a time-travel gadget.

The Doctor poses as Styles in order to catch the assailants. They try again, but the Doctor convinces them he's not Styles. Jo accidentally activates one of the time-travel gadgets and zaps herself into the 22nd century, and the Doctor and the guerrillas follow her. One of the guerrillas, Shura, is attacked and left behind, presumed dead.

We discover that in this future, the Earth is ruled by the Daleks — who did not meet their "final end" five seasons prior after all (thanks to Terry Nation's planned American spinoff never materializing) — using their ape-like Ogron subjects as heavies. There are also human collaborators, led by "the Controller". Jo and the Doctor are taken prisoner at the Dalek base, but rescued by the guerrillas — who finally get round to explaining that they're trying to kill Styles because they believe he blew up the peace conference, which started a series of wars leaving Earth shattered and ripe for Dalek conquest. They mean to kill Styles first and change "history".

The Doctor realises that this is a Stable Time Loop — that the explosion was actually caused by the guerrillas: specifically by Shura, the injured man left behind in the 20th century, trying to fulfil his mission. He gets back to the 20th century in time to have Styles's house evacuated and the pursuing Daleks and Ogrons are destroyed when Shura detonates his bomb.